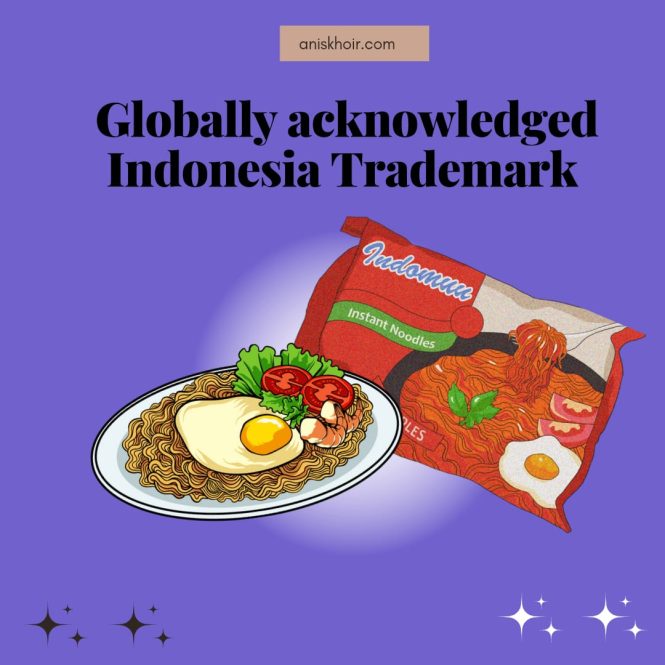 Trademark is one of the intelligent properties made and used by a business entity or a person to distinguish their product. Once registered, trademark becomes a business’ right that no one else can use to introduce themselves. And, there is a product that is globally known as the best Indonesia trademark4.4 / 5 ( 9 votes ).

Trademark, or sometimes called brand, consists of name(s), word(s), logo, or design that is recognized belonging to certain goods or services. However, it means not only a product’s physical appearance. It means overall consumers’ perception of a product.

Do you like noodle? Of course, you do. Noodle, especially the instant one, has become everyone favorite to quickly satiate hunger. One of globally popular Indonesian brand of instant noodle is Indomie.

Indomie is known for its taste and practicality. With the slogan, “Indomie, seleraku….“ or Indomie, my flavor…, its journey started as of 1972 when PT. Sanmaru Food Manufacturing introduced the instant noodle. It is not the first brand in this area. However, it caught people’s attention and was getting more popular than the first brand.
Indomie has 70% share of Indonesian market. And now, it is traded in 100 countries in the world making it the biggest instant noodle producer.

Fried noodle has always been favorite food for most of Indonesian people. However, it could not be prepared instantly until Indomie launched the first fried instant noodle in 1983 in Indonesia.
It was the biggest innovation at that time. The product gained immediate highlight from Indonesian community. And it seemed to catch the heart of not only Indonesian people but also the world!

The product soon became favorite instant noodle abroad. It penetrated the markets in USA, Australia, England, Middle East, China, etc. Moreover, many of the world’s celebrities posted the picture of the noodle on their social media.

Indomie also won many awards. Among other, it was the first on the LA Times Instant Ramen Power Rankings list in 2019. In addition, the fried noodle variant was enlisted on the best instant noodle list according to Thrillist on March 14, 2021.

There are actually many other brands of instant noodle in Indonesia. The first one is Sarimi that was acquired by the giant producer of Indomie, PT. Indofood CBP Sukses Makmur. The others are Gaga, Nissin, Mi Sedaap, Sakura, etc.

However, none of the brands overpowers Indomie. Indomie has become so powerful that people will automatically think about it when they are talking about instant noodle. Moreover, a dine-in noodle stall in Indonesia is called Warmindo or Warung Makan Indomie (Indomie dine-in Stall), even if they also sell other brands of instant noodle.

Indomie is the Experience

Brand or trademark is not only about a product, but also what consumers perceive and experience. Indomie is the consumers’ experience when it comes to instant noodle. And it became the only Indonesia Trademark on Top Ten Global Brand list of the Kantar World Panel’s Brand Footprint in 2021.